Registrations to The Little Theatre Creative Workshops for 2022
are now CLOSED......

​Thank you for such an overwhelming response.

Vishnu getting creative with electronics with the Green Workshop and teaching them about
electrons & protons and showing them how to build a wand that lights up! 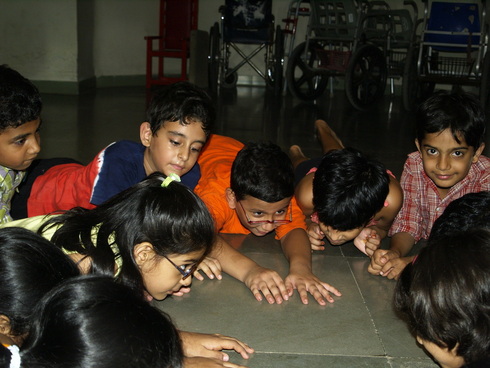 Green Workshop participating in a theatre workshop
The Annual Creative Workshops have been designed specially for the 5 to 15 year olds. The programme starts in September and ends in December after the Christmas Pantomime shows.

The programme includes Creative Workshops on Saturdays from 4 to 5:30 for the 5 to 15 year olds at our air conditioned studio in Nungambakkam, Cheria aana, 'trick or treat' during Halloween, carol singing on the back of bullock carts and a cast party  at the end of the programme and the opportunity to be part of the little theatre's annual Christmas Pantomime Shows.

The Little Theatre's Christmas Pantomime has become the
highlight of the Christmas season in Chennai and has become a
'tradition' with the city for the last 30 years. The Little Theatre has
played for 25 of these years to packed audiences at the
Museum Theatre, Egmore...Dec 2019 was no different.

KK and his team gave 8 magical performances to houses who were bursting at the seams. People bought tickets and sat on the aisle steps as usual! Some even stood at the back to watch the shows! And then bought more tickets to sit and watch it! :)

Unfortunatly due to the Covid 19 Pandemic our shows for Dec 2020 & 2021 were cancelled. We look forward to bringing you the shows in December 2022.


Ashley Shillong taking the Blue Workshop for a theatre workshop 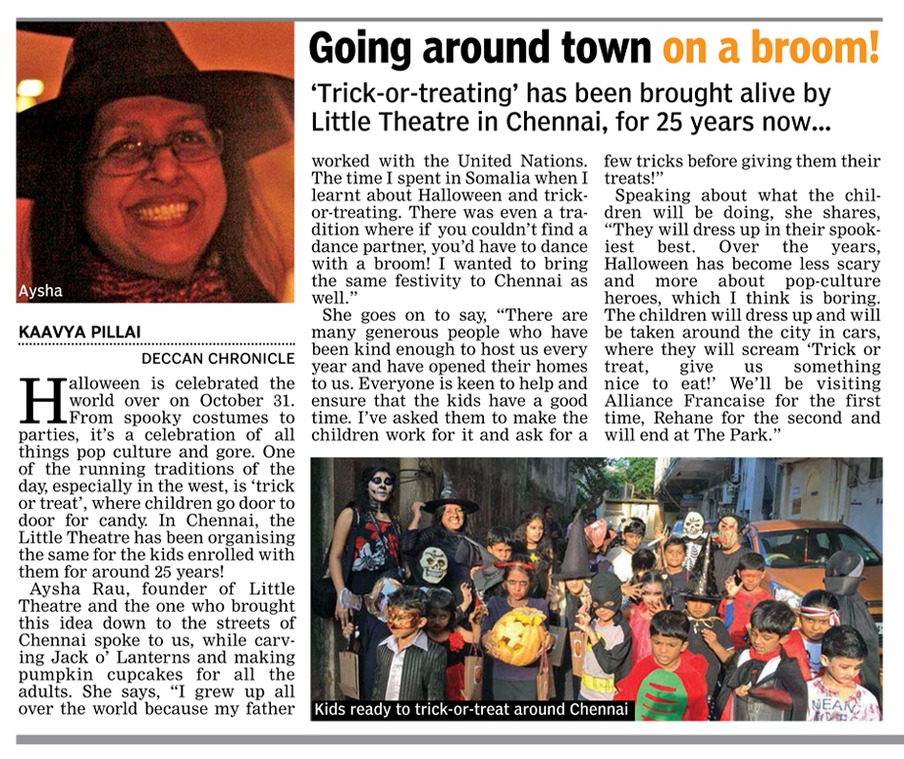 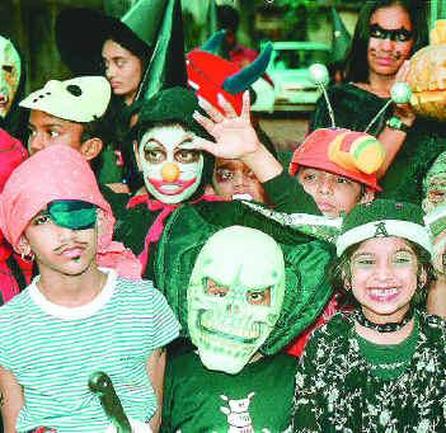 Ever wondered how Eric, Donna and the rest on `That 70s Show' have the guts to prance around and act silly? Easy! They get paid to do that, is probably the instant answer. But what about the people who cavort on stage in yellow tights and Robin Hood hats just for the fun of it — no money or fame involved — right here in Chennai?

"Drama is a way to forget yourself," explains Aysha Rau, who founded the Little Theatre in 1991. "You're playing a part, and effectively you become that person." The Little Theatre conducts workshops for children between the ages of five and 14. She also says that theatre builds self-esteem and helps a child rid itself of all inhibitions. "Even if you are afraid of speaking on stage, the moment you are given a role to play, that fear vanishes since you are no longer yourself but the character you have chosen to play," says Aysha.

The Little Theatre also conducts free theatre for the children of the Corporation Middle School, Chetpet, and the kids put on a show based on a social theme every year. This year's theme was "inclusion" — of the disabled, of women, religion, gender, caste — and the production was directed by Pralayan. "The children came up with some amazing ideas and Pralayan managed to incorporate all of them into the play," says Aysha.

Krishna Kumar S. of Masquerade, a Chennai theatre group that has been conducting workshops in schools, also agrees that children come up with innovative ideas.

"Their powers of observation are so great and I learn so much from them when I do workshops." Apart from acting, the children also learn set design, costume design and more. Krishna Kumar says that schools and parents are realizing that children need relaxation through forms that will also build personality, and see theatre as the perfect medium for this.

Aysha explains that she started The Little Theatre for kids to have a place to relax after school. They also have a youth choir and orchestra where children from regular schools and from Vidya Sagar meet every Saturday to sing and learn to play instruments. The choir recently gave their fourth performance at Max Mueller Bhavan and will get back in tune from July, after a short break.

And for the older theatre fans, Masquerade has started Landing Stage, a youth theatre group for teens — age 14 to 19. The idea is to get teenagers to expend their creative energies, learning everything from acting to lighting and backstage management. So whether you are five or 19, there is a place for you to learn... or if you just want to have some fun, meet new people and learn a few interesting skills.