THE LITTLE THEATRE IN CORPORATION SCHOOLS 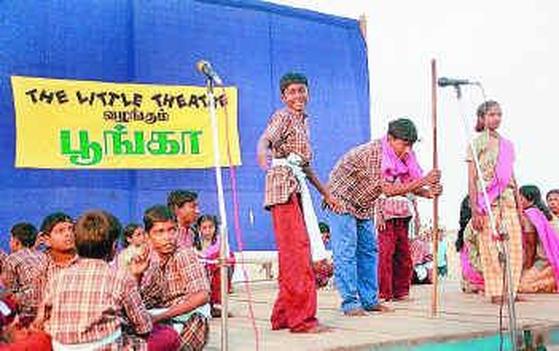 
Messengers were the message

Most of the characters in the play were close to the real world that the children live in.


The little theatre with a social theme.

THE SLUM of Pushpa Nagar in Nungambakkam was awash with lights recently. A temporary stage was set up close to the slum board tenements and the speakers were blaring some of the popular film numbers. The setting was just apt for a group of street theatre actors to take centre stage, in this case `centre street' to present a message to an audience of housewives, auto-rickshaw drivers, tea stall chatters and several children.

The play `Poonga' focused on a theme very pertinent to its audience: `inclusion'. The play explained why no child should be excluded on the basis of caste, community, sex or disability.

And the players who carried forth the message were themselves children from the economically weaker strata of the society that is the most affected. In many ways, the students from Corporation Middle School in McNichols Road, Chetpet were themselves the message to the audience as they danced and sang in unison in the play produced by The Little Theatre.

Most of the characters in the play were close to the real world that the children live in. In one of its segments the play focused on the role of the woman in a household. While the male character keeps bragging about all the `hard work' that men do to earn a livelihood, a part of the stage is taken up by the `woman of the household' who goes through her daily grind without much ado.

When another male character dares to defy the norms and take up household work while his wife goes out to work, all the other actors make fun of him. The audience too laugh... but at their own expense. For a few minutes later, an elderly woman (who is a kind of Soothradari for the play) points out that if domestication of a man is wrong, so too it is for a woman. This is followed by silence for a few seconds for the message to sink in.

Another interesting segment involves the Ramzan fast of a student in the class. When his classmates are having lunch, the student stays away since he does not want to see any food. But the other students do not understand the fast and they tease him with all their lunch boxes. The student cries and leaves the school swearing not to return. Much of the audience is perturbed by the portrayal here, but the setting quickly changes to the next day at school. The Muslim student is absent much to the surprise of his classmates.

The next scene: The lunch hour next day. The teacher of the class is confronted by several parents who want to know why all the students refused to take lunch boxes to the school. After some queries, the students reply that they too were fasting along with their friend, whom they teased earlier. Poignantly done, the scene evokes claps and even whistles from some of the audience. This is followed by a song and dance routine where the students reiterate their unity.

Most of the actors in the performance took pride in spreading the message. "The important thing is that girls must be allowed to go to school," said N. David, a class VIII student, with a twinkle in his eye. He played the key role of an old drummer in play. But more than mere play-acting, the student was speaking from his heart.

And talking of education for the girl child, some of David's classmates were already aiming high. R. Thenmozhi, whose father is a cook and her friend, Nalini, both want to become doctors. As for David, he wants to take the IPS entrance, exuding confidence which was common to the 40 students who participated in the play. During the last two weeks, Poonga was staged at seven slums identified as those having high school dropout rate.

This is the fifth successive year that the school students have performed to audiences across the lanes and by lanes of the city through the workshop organized by The Little Theatre. The play was directed by renowned street theatre activist, Pralayan and choreography was done by Hariharan, artistic director of Abhinaya. For the songs, the students were aided by Carnatic singer, Rageswari.

"The present education system is stressful and youngsters need activities to ventilate and develop their creative talents," says Aysha Rau, founder of
The Little Theatre. People who the saw the children perform will have little doubt on their talent. 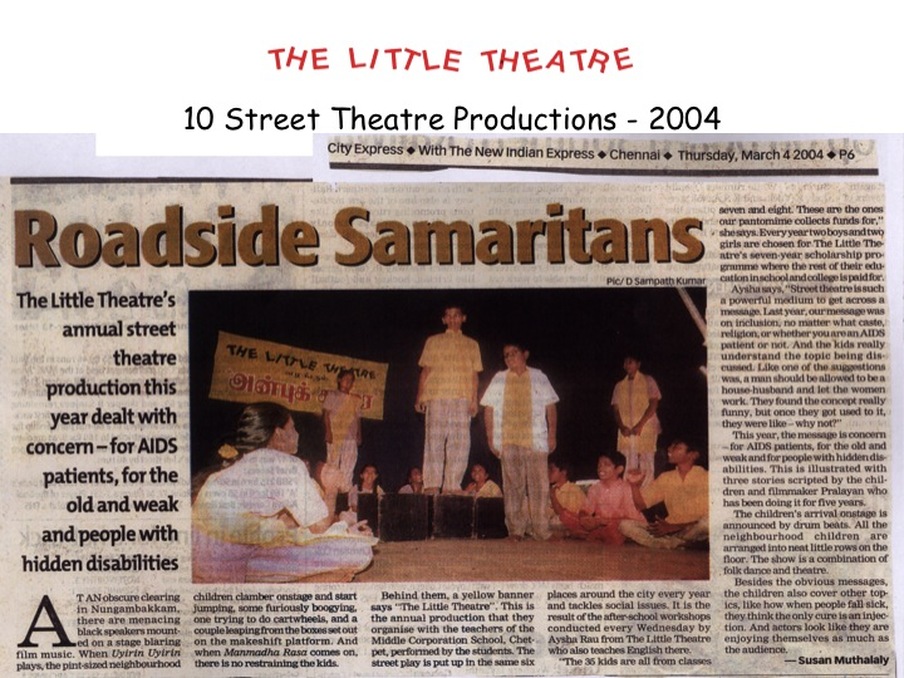 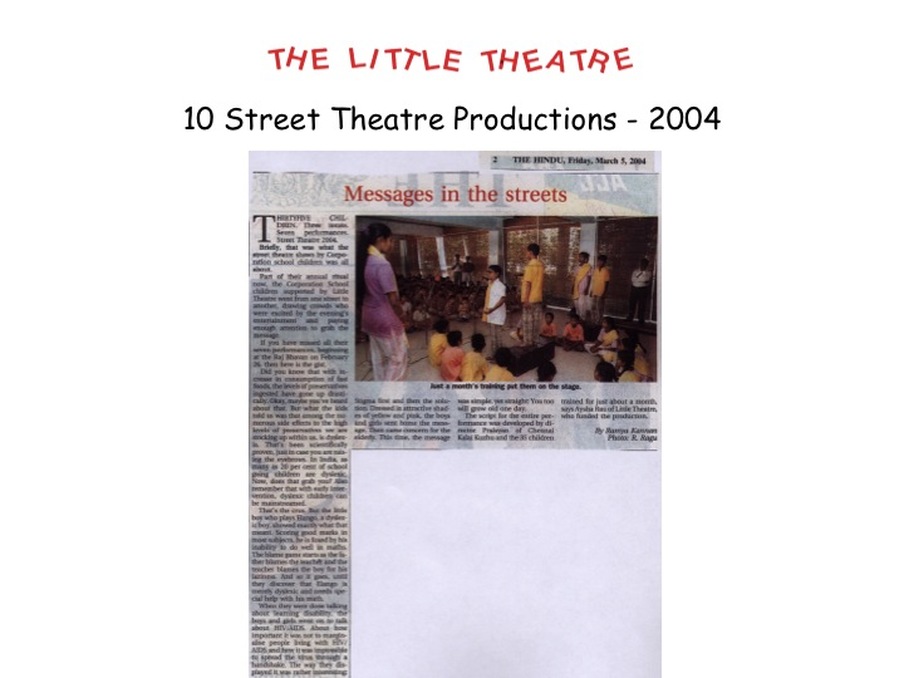 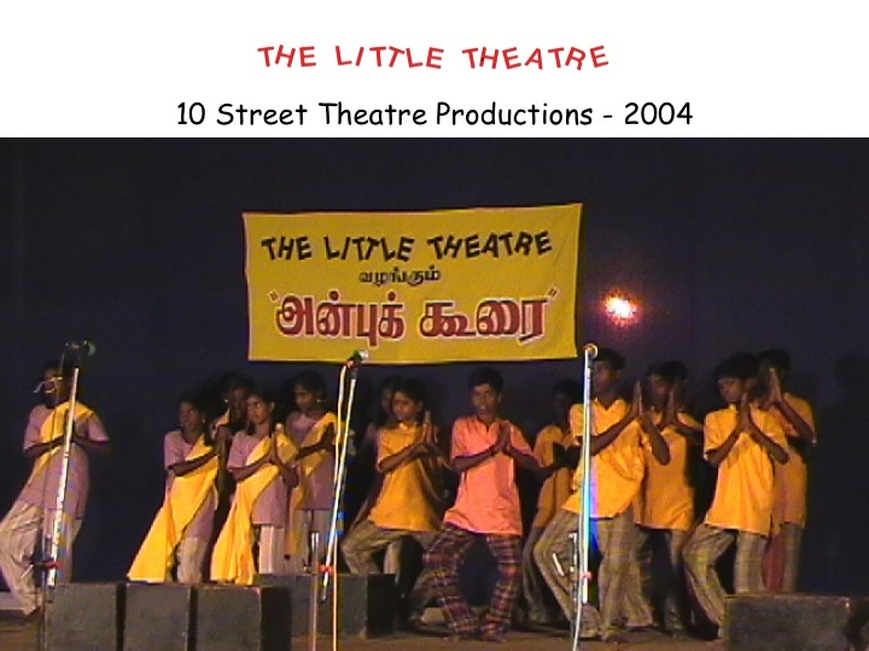 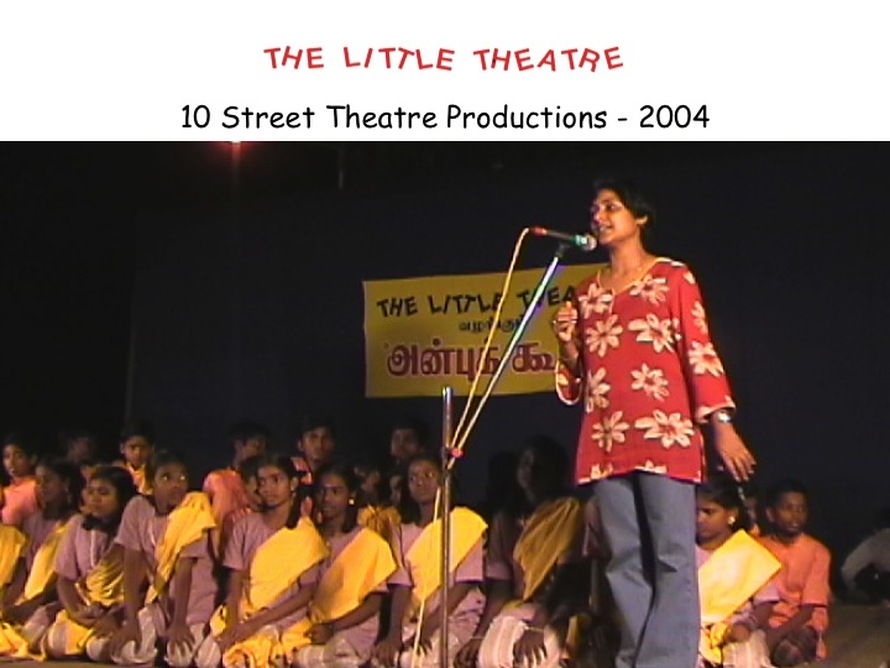 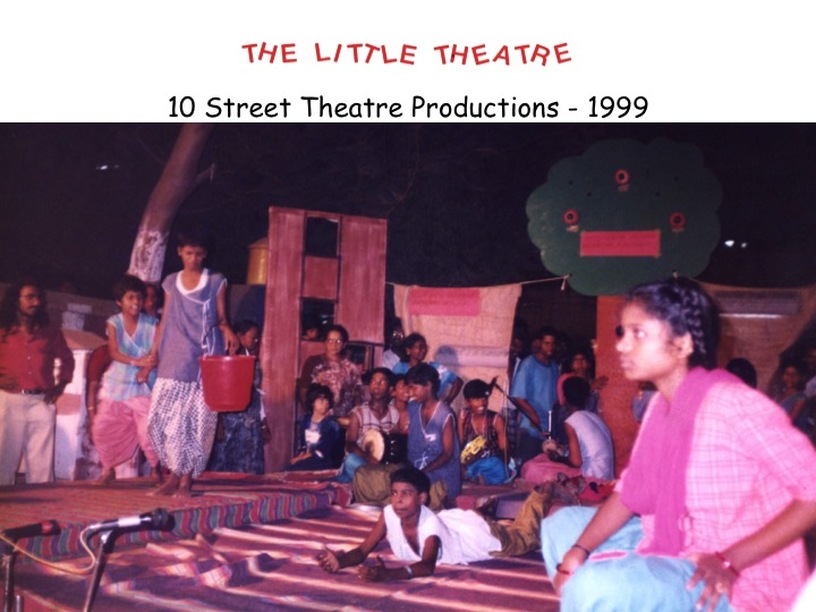 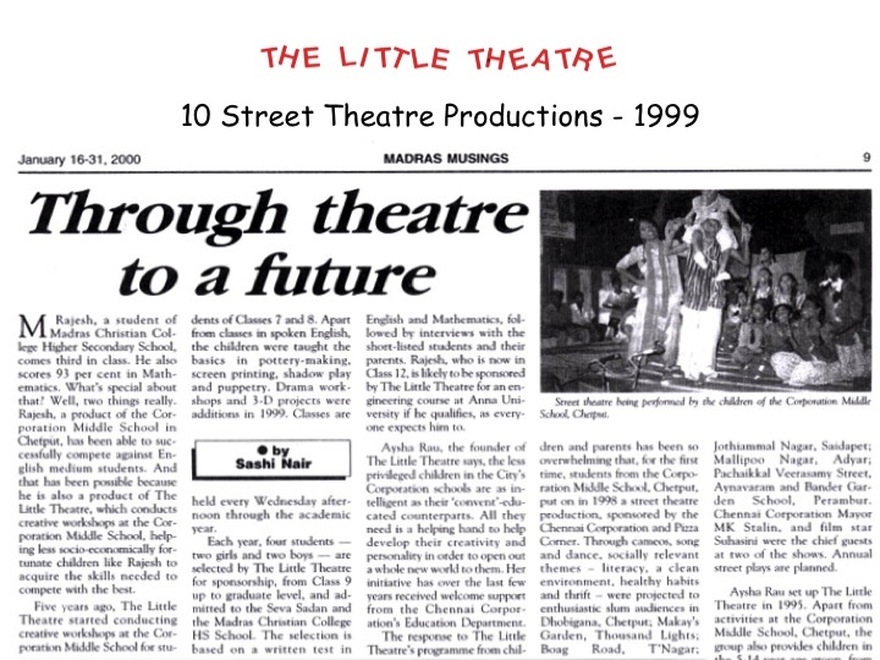 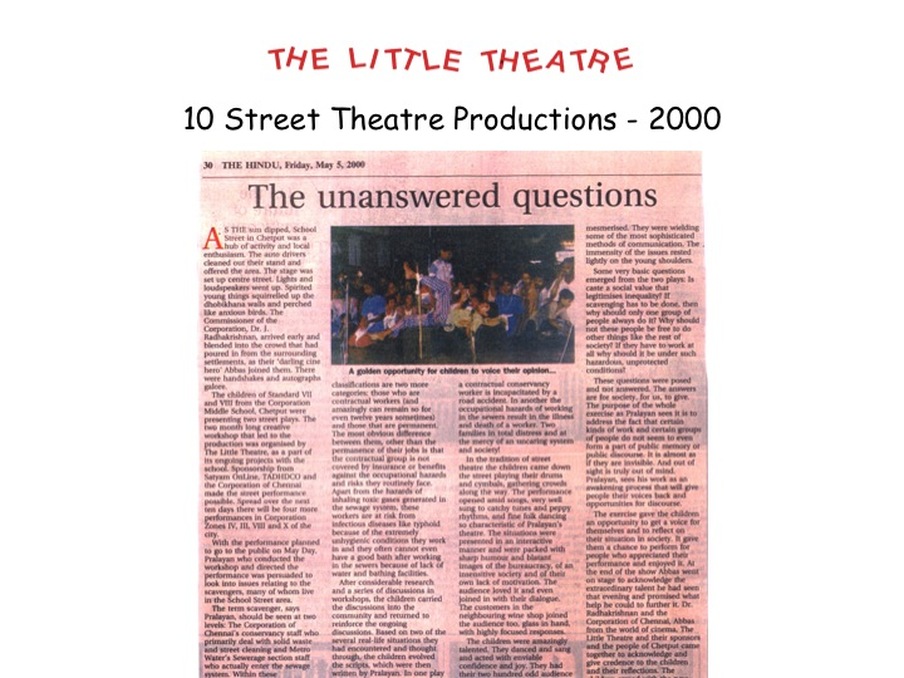 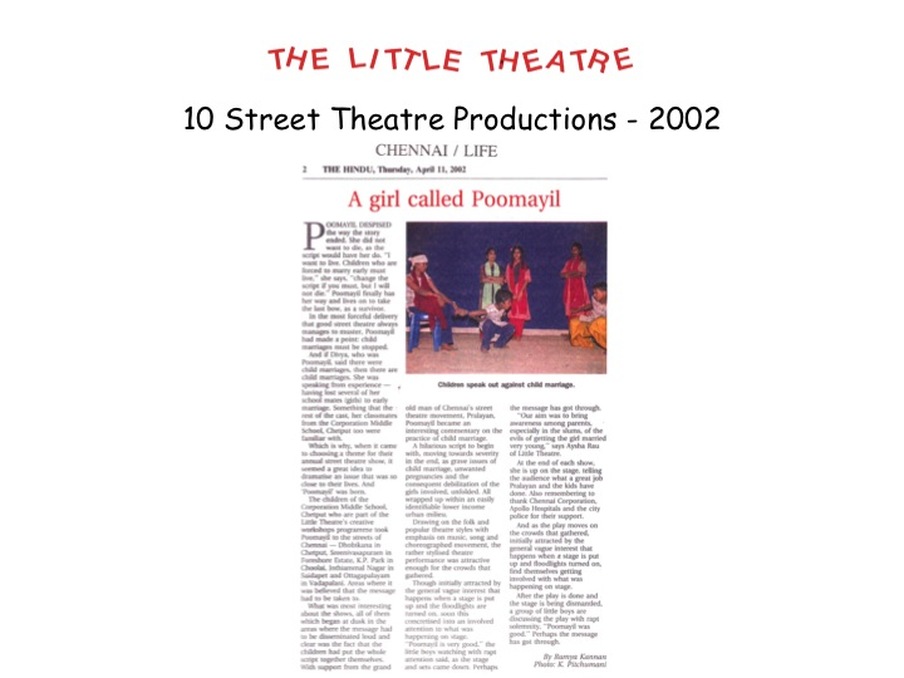 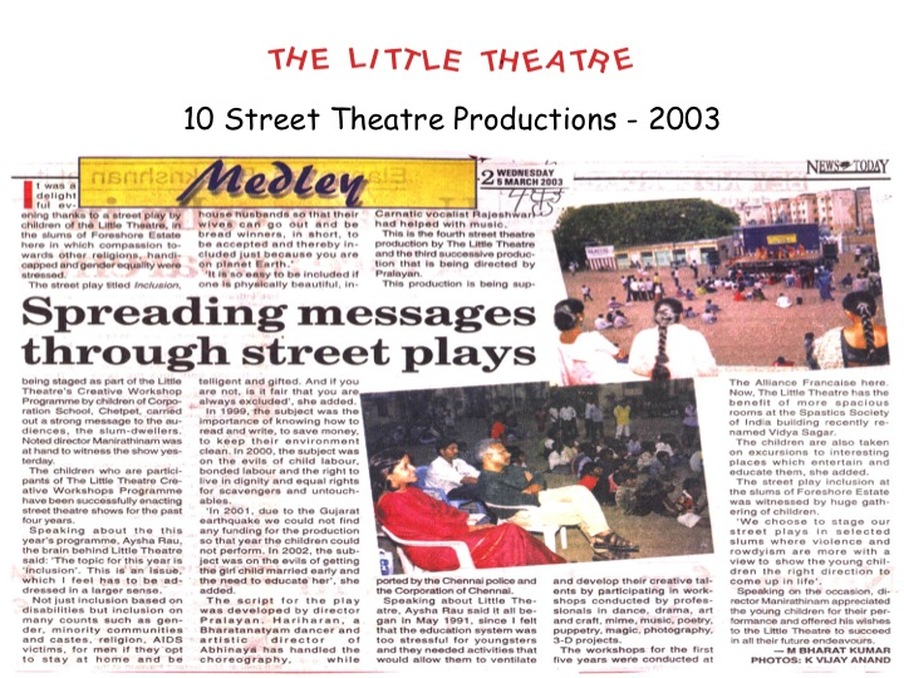 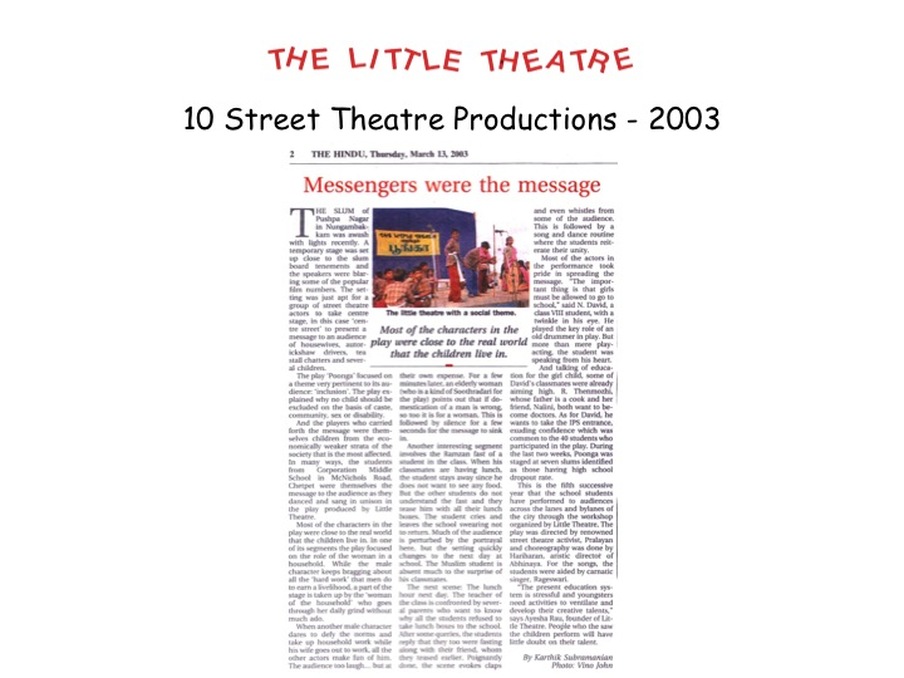 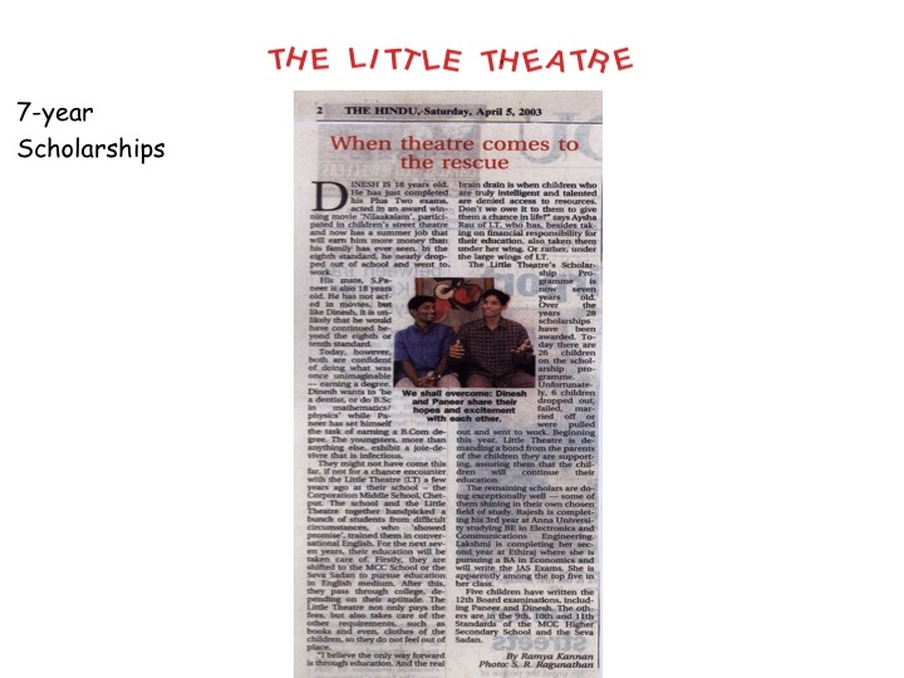 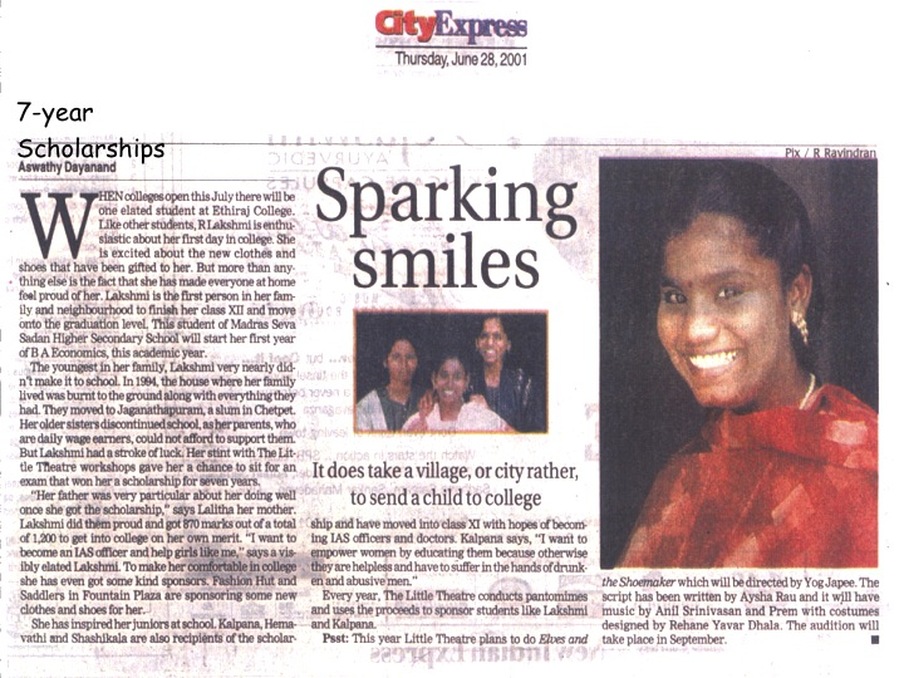 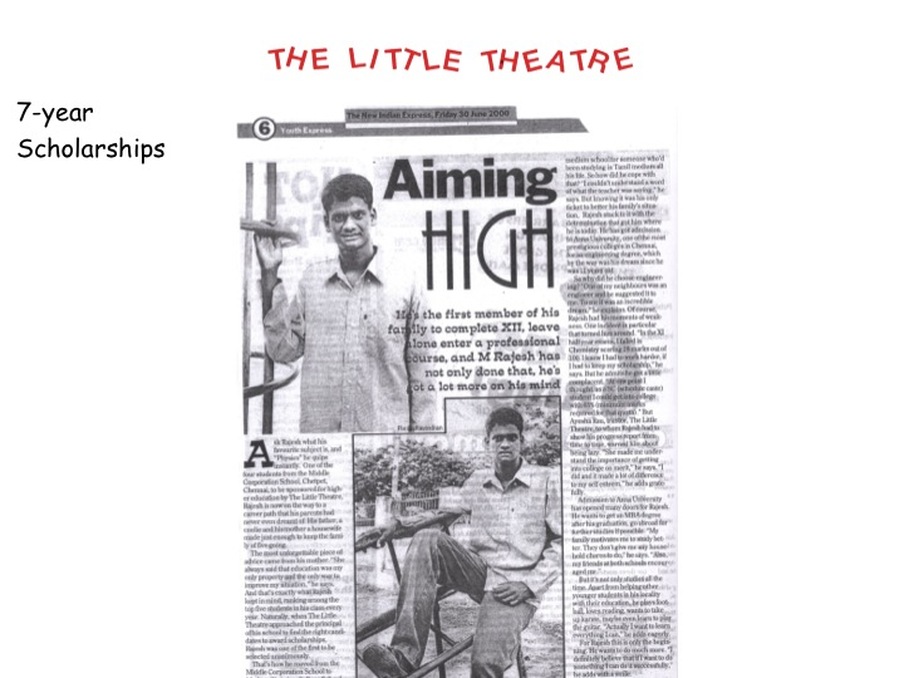 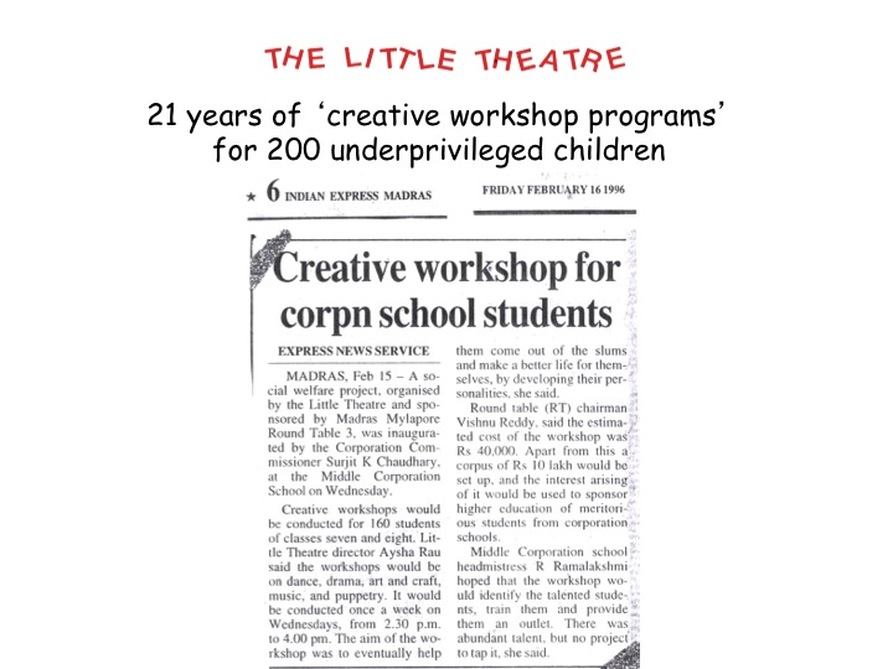