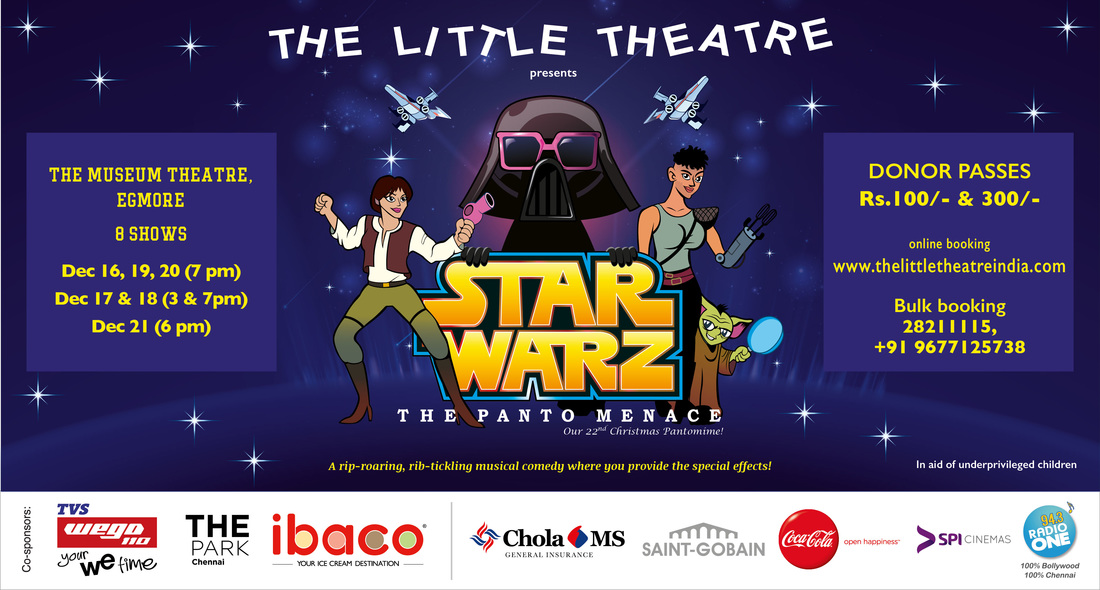 In The New Indian Express on Saturday December 17, 2016


When Star Wars grooves to Kaala ChashmaBy Gokul M Nair  |  Express News Service  |   Published: 16th December 2016 10:55 PM  |
Last Updated: 17th December 2016 04:20 AM  |   A+A A-   |
The studio of The Little Theatre in Nungambakkam is a flurry of activity ahead of its current Christmas pantomime. A heady mix of parody, musical and theatre-based on the evergreen Star Wars franchise, no less – their ‘Star Wars-A Panto Menace’ is a rib-tickling take on the iconic original trilogy. As always, the performers include an adult cast of long-time collaborators and first-timers, joined by close to 90 children. As they take centre stage this week, City Express goes behind the scenes to check out what goes behind the choreography and props in their latest offering.
Both departments are being handled by Little Theatre mainstays Vikas Rao and Ashley Shillong, choreographers who have been closely related to several of their previous productions. “I’ve been choreographing The Little Theatre pantos for the last six years,” says Vikas. “I’ve experimented a bit from last year’s pantomime. I’ve gone with a more lyrical bend to the choreography, with elements of hip-hop and contemporary dance as well. It’s going to be a different take – whatever they’re emoting will be in sync with the lyrics.”
He shoots of two fast numbers that feature in the panto — Kaala Chashma and Moves Like Jagger. “It’s almost like a Bollywood movie; we have musical interludes after certain acts that serve as entertainment. While Kaala Chashma is retained as it is for its energy, the lyrics for Moves Like Jagger have been changed a bit to suit the mood and style of the panto.”
The 10 tracks featured in the panto have been re-mixed by Nipun Nair, another collaborator who is working in Hollywood. “I’ve also added elements of lyrical hip-hop. Another contemporary dance number is the mashup Ennodu Nee Irundhal/ Lay Me Down by Vidya Vox. This will also be a lyrical interpretation, with two characters singing while the other two will be emoting,” he adds. “It’s something that hasn’t been tried before in theatre. So that’s another aspect we’ve brought in.”
Vikas adds that it was especially challenging to teach the three sets of children in the pantomime, each of which was trained in three different workshops. “The children from red, blue and green workshops are doing four different songs. With children, you need to keep them occupied while also helping them understand intricate stuff like weight transfer during dancing. With the older actors, it was easier because those who picked it up quickly could help those lagging behind.”
Vikas also has a surprise, which he says will be under wraps until the audience actually gets a glimpse of it. But it will involve fellow veteran Ashley as well, who adds, “I have choreographed the dances since 2006, before making my way to singing and acting. But this time, I’ve ventured into making the props for it. The bigger challenge was making the space ships – and R2D2!” he grins, as he leads us through the motley workshop where he created his props.
‘Ray’ guns made out of plastic bottles and painted with pop-out colours are strewn around. In order to give it a very space-y feel, cardboard cut-outs of circuit boards were created. “It’s a big production, especially since we’re doing a popular franchise like Star Wars, there are a lot of individual characters, which reflects on the choreography and the props too.”
Certainly the most popular, and most awaited as well, will be Darth Vader’s mask! “I’ve also created a prop of the TIE Fighter in the film. The whole idea was to make props with whatever we could find. Also, a lot of paint used is fluorescent, and they glow in the dark, giving an added element of fantasy.”

The year is 3015, The dark lords from planet Vulcan are approaching the last free planet in the galaxy, Earth. A planet where social order has collapsed,& is filled with ruthless gangs of raiders and mutants. The evil Emperor Palpatine assembles a deadly team of pure evil "Sith". A team headed by the man behind a mask, man feared by the whole galaxy, the destroyer of planets, the bringer of darkness, they call him Darth Vader.

Darth Vader & his minions have destroyed most of the Jedis in the galaxy & absorbed their powers. There is but one last soul that he must destroy to become the ruler of the universe, and the prophecy goes that, that boy is on planet earth. If this chosen one is discovered by evil, the universe will be thrown into darkness & all life as we know it will end; and a new era of darkness shall begin.

Princess Leia who leads the resistance from an already destroyed planet Zumba sets of on a journey to find the chosen one before Darth Vader does & train him to fight against evil & to extract revenge on the dark side.

Come! Join us on an epic adventure where a battle between good & evil,  that will decide the fate of the universe. Choose your side wisely; the Sith or the Jedi. Whatever u may choose: May the force be with you! 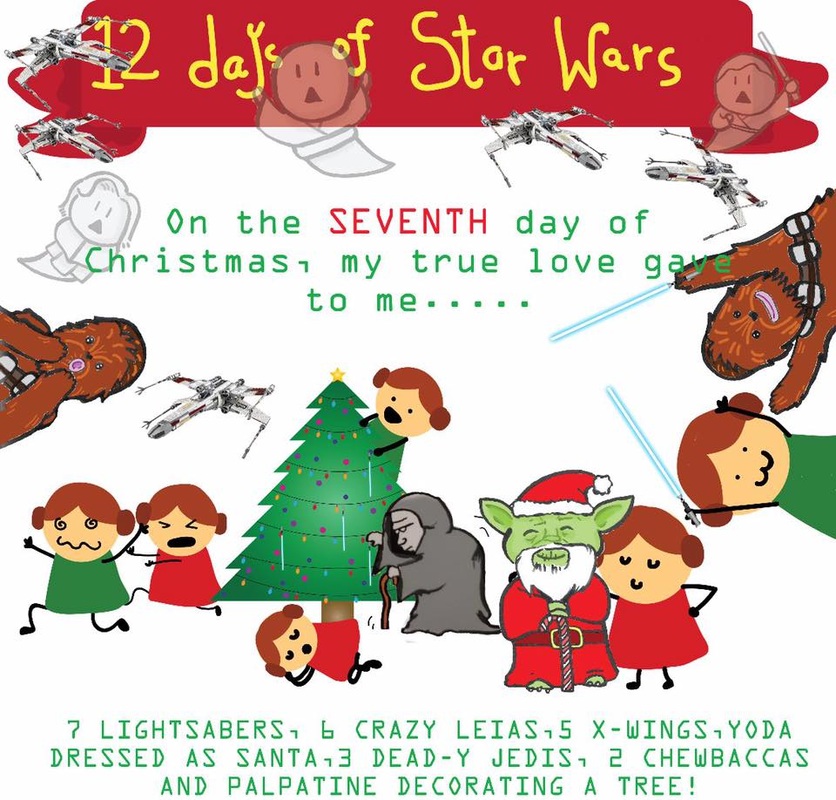 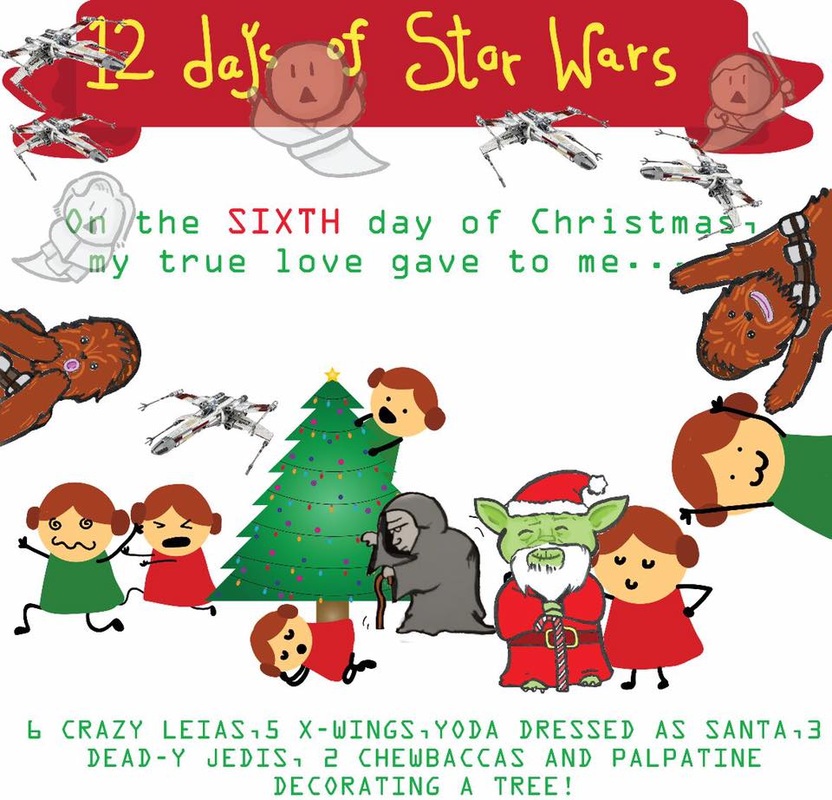 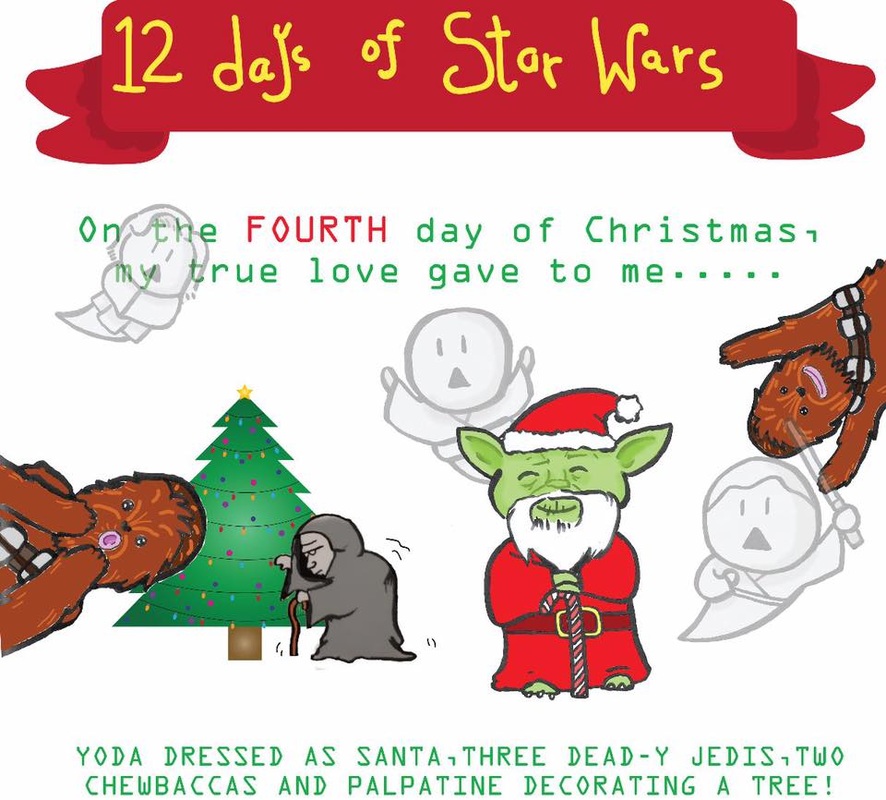 Check out our #MannequinChallenge
Meet the cast and crew of the panto in this video!
You wouldn't want to miss out on this bunch so hurry and book your tickets here'
Follow our Instagram page- @thelittletheatrechennai for cool updates on the show.
"May the force and our tickets be with you!" 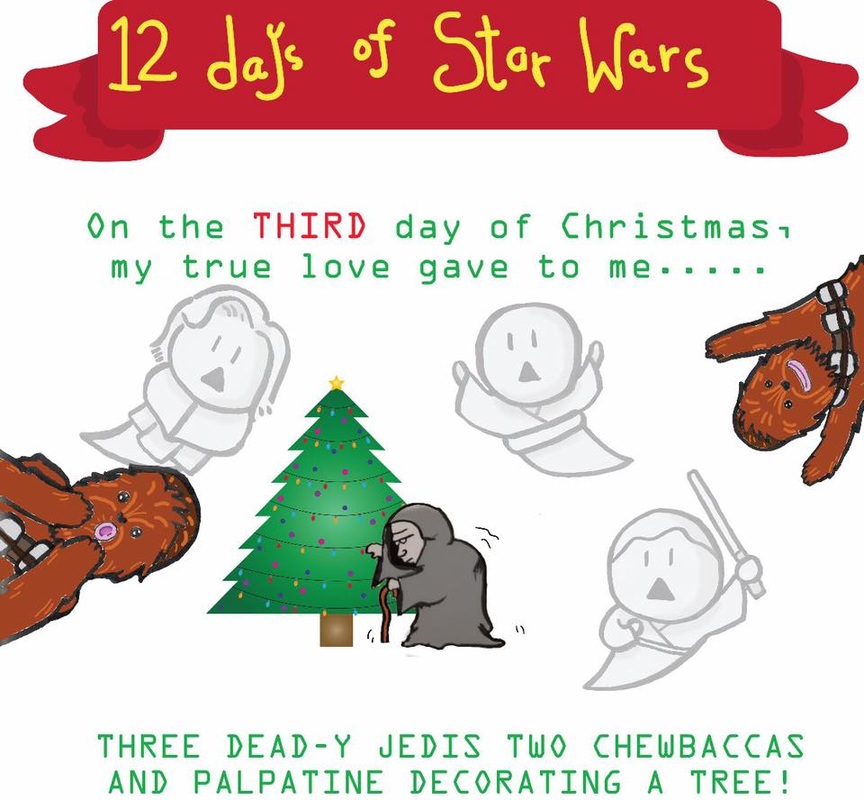 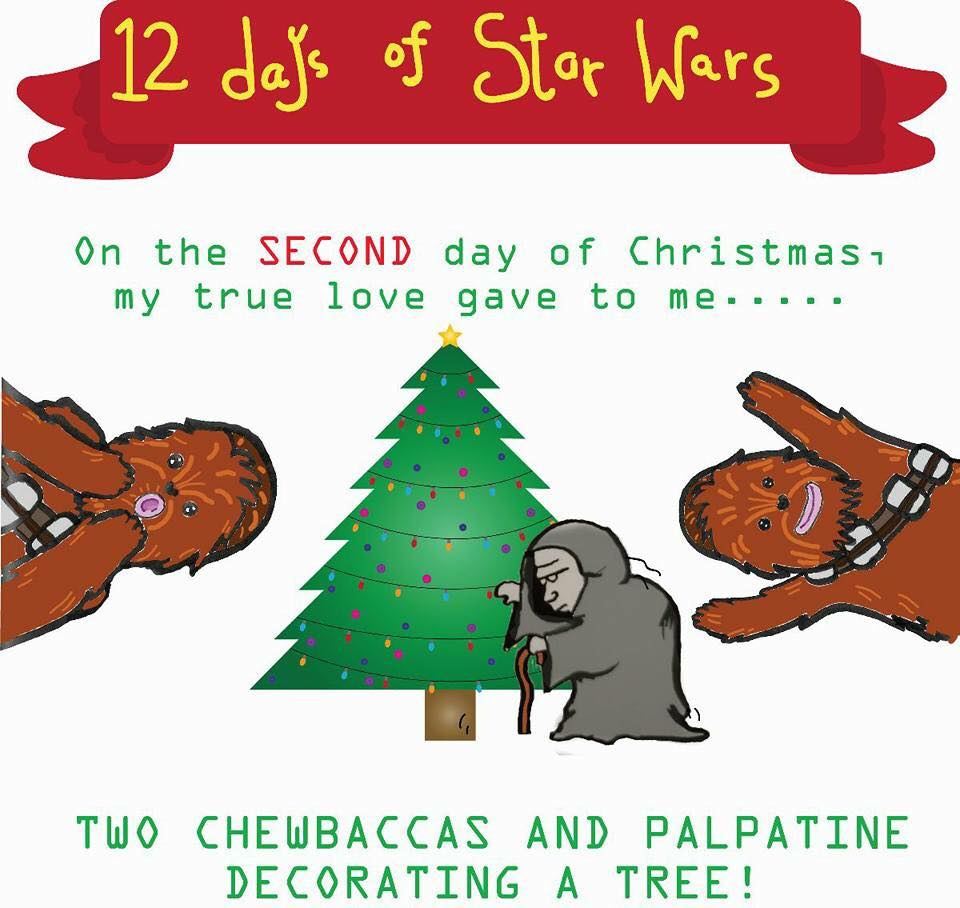 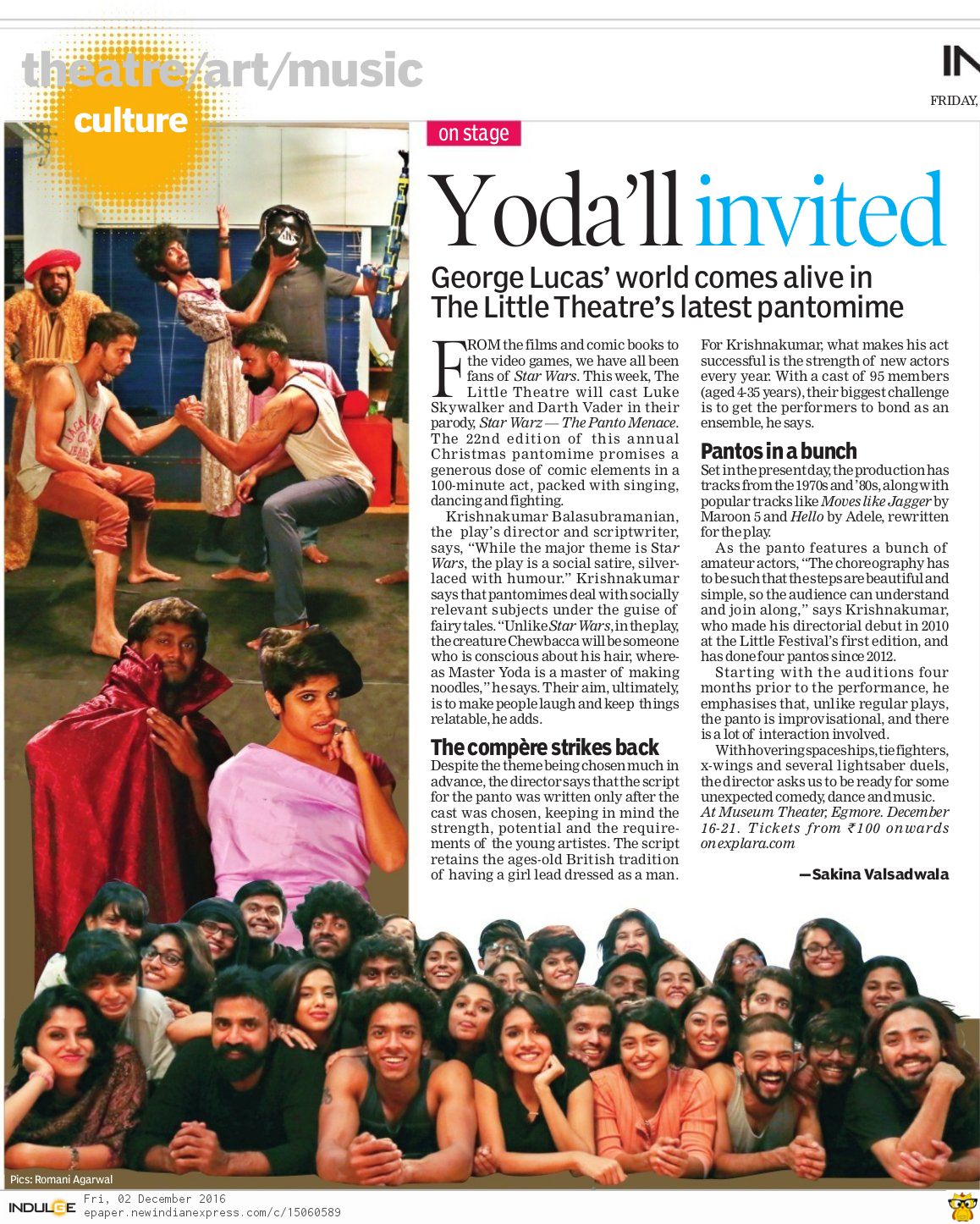 
​Dec 04 2016 : The Times of India (Chennai)
SEASON SPECIAL - Pantos, plays usher in X'Mas cheer
Saranya Chakrapani
﻿
﻿
Theatre Companies Come Up With Productions That Celebrate The Season Of Love And Giving
Films and theatre classics make for great Christmas favourites and some of Chennai's stage masters know this just too well. Even as the city prepares to welcome the spirit of love and giving, they're not just concepts circulating the dinner table, but are also finding place in the various plays and musicals lined up for the season.Possibly the most popular of them all, The Little Theatre's `Star Warz ­ The Panto Menace', will also be the 22nd edition of their annual pantomime, and at its most fundamental place, talks about the “triumph of good over bad,“ as Aysha Rau, founder, The Little Theatre, puts it.

“The Christmas pantomime is al ways a parody . It takes off from a particular theme, to which the characters are loosely connected. But the pantomime itself is always an over-the-top, extremely hilarious rendition, and involves a lot of physical theatre, singing and dancing,“ says Rau.
Typically , it's also an inherent characteristic of the pantomime to actively engage the audience by having the actors constantly interact with them through the course of the performance.“For instance, our dame is always played by a man and our principal boy , played by a girl,“ she says. “The dame keeps asking the audience if she's pretty. And they unanimously cry no.“

This year, the pantomime will have a cast strength of 95 and run into nine shows from December 16 to 21 at the Museum Theatre. Scripted and directed by Krishnakumar B, the first show of the panto will be exclusively open to 500 underprivileged kids and the remain ing eight shows, to the public.
​
Mellow Circle, which has been pre senting Christmas productions for al most 16 years, ushers the city into the spirit of Christmas with their play, `Alan Samrow and the Ministry of Loops', ahead of many others. The play , which will have its final show at the Museum Theatre on Sunday even ing at 7pm, has been scripted and di rected by Michael Muthu. “It follows Samrow, a hard-hearted and cynical young man, who is transformed into becoming a better person during the Christmas season,“ says Mohan Daniel, president, Pratyasha Trust, a home for HIV positive kids, which will get the proceeds from the show.
Mellow Circle, which started in 2000, has presented several classics such as, `A Christmas Carol', `Silent Night' and `It's a Wonderful World' over the years.
“ All our productions are a combination of theatre and music. This show will be supported by the 50-member Mellow Circle choir,“ says Daniel. 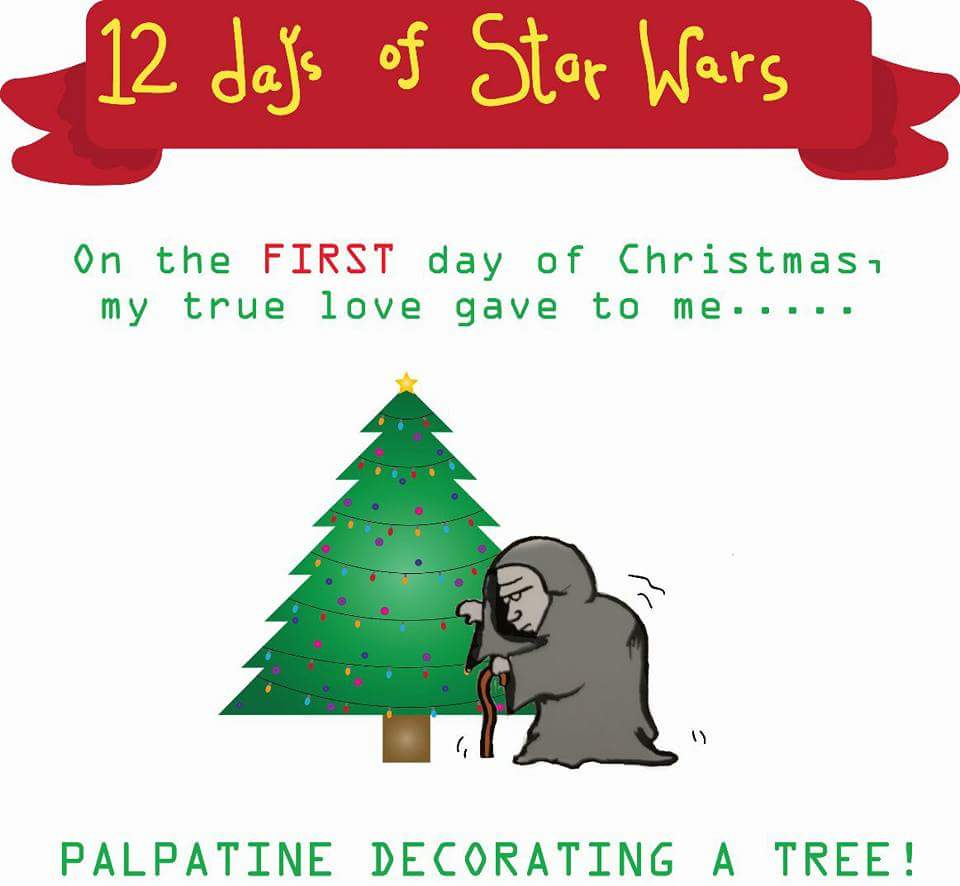 ​​ Friday Review FRIDAY REVIEW » THEATREApril 30, 2016 THE HINDU
​
As The Little Theatre turns 25, founder Aysha Rau about her journey.Here’s why Aysha Rau’s life panned out the way it did: she realised she’d rather talk to people than fish. “This was just one more turning point in my life that directed me towards this city and made me do all that I did,” says the 59-year-old.
Aysha grew up around the world, since her father was in the U.N. Despite a degree in Marine and Microbiology from the University of Portsmouth, U.K., Aysha decided to move to India and work as a copywriter with O&M, Calcutta. In 1982, she moved to HTA (now called JWT), Madras and met Jayaraj Rau. It wasn’t love at first sight, she says, and yet, a year later, they were engaged. She took a step back from advertising when Rohini was born in ’86, and Ajay, two years later. “But I didn’t see myself as someone who would just look after the babies and the house. Women should do something with the privileges they have to be a good mother,” says Aysha.
And so she did, with her bustling energy: Aysha taught her children papier-mâché and puppet theatre; she took a teacher’s training course for learning disability when she realised her son had borderline dyslexia; she found innovative ways to teach and encouraged her kids to act, dance, draw, sing, sail, play music and learn martial arts. “I think bringing up a child through the arts helps them a lot. There’s a correlation between math and music. Dance helps with posture and movement. Acting, putting yourself in someone else’s shoes, teaches empathy, and being on stage helps with self-expression and self confidence.”
Suddenly, in 1991, she had a thought: instead of limiting these activities to her children, why not open it out to many more? Thus came the idea for The Little Theatre (TLT). “It became my talking point at every dinner party after that. I wanted children to register for the annual programme; by the time we opened our doors, we had 99 kids enrolled.”
Now, the city, beams Aysha, is full of TLT kids who are all grown up. Chennai’s annual Christmas pantomime, which TLT took over in 1995, has been a rite of passage for many city-based actors, musicians and dancers. The outreach programme, begun in 1995, reached out to talented children from underprivileged backgrounds. From 2010, Toddler Theatre has engaged two-to-four-year-olds. The Little Festival was started the same year to bring international productions by adults for children to this city. In 2015, the hospital clowns programme took flight.
Aysha was at the helm of all this, while juggling freelance careers in advertising, model coordinating and casting for feature films. She’s also published short stories and three children’s books on marine life. She’s acted in a few productions, scripted many and produced most.
Seems like she’s got a lot of energy, doesn’t it? “I’m always thinking one thing, doing another and planning a third. But I just do things I enjoy. I don’t mull over them for too long — I just dive headlong and make things happen.”
This month, as The Little Theatre turns 25, Aysha says she’s handed over the reins of the company that popularised children’s theatre in this city to her daughter and son-in-law, Krishnakumar Balasubramanian. “I’m letting the youngsters take over. But they don’t have to worry about marketing and raising funds. All that is on me.” Does she enjoy it? She chuckles, “Well, I’m good at it. I’m a hard negotiator and I guess, a tough nut to crack.”