8 Shows from Dec 5th to December 10th at the Museum Theatre, Egmore!
Thank you Chennai! Every show was SOLD out with more than 100 people paying and sitting on the aisle steps at every show!!! :)
Next year KK's directing and we are basing the panto on the story of "Prince of Persia!"
Book your tickets online:
www.indianstage.in 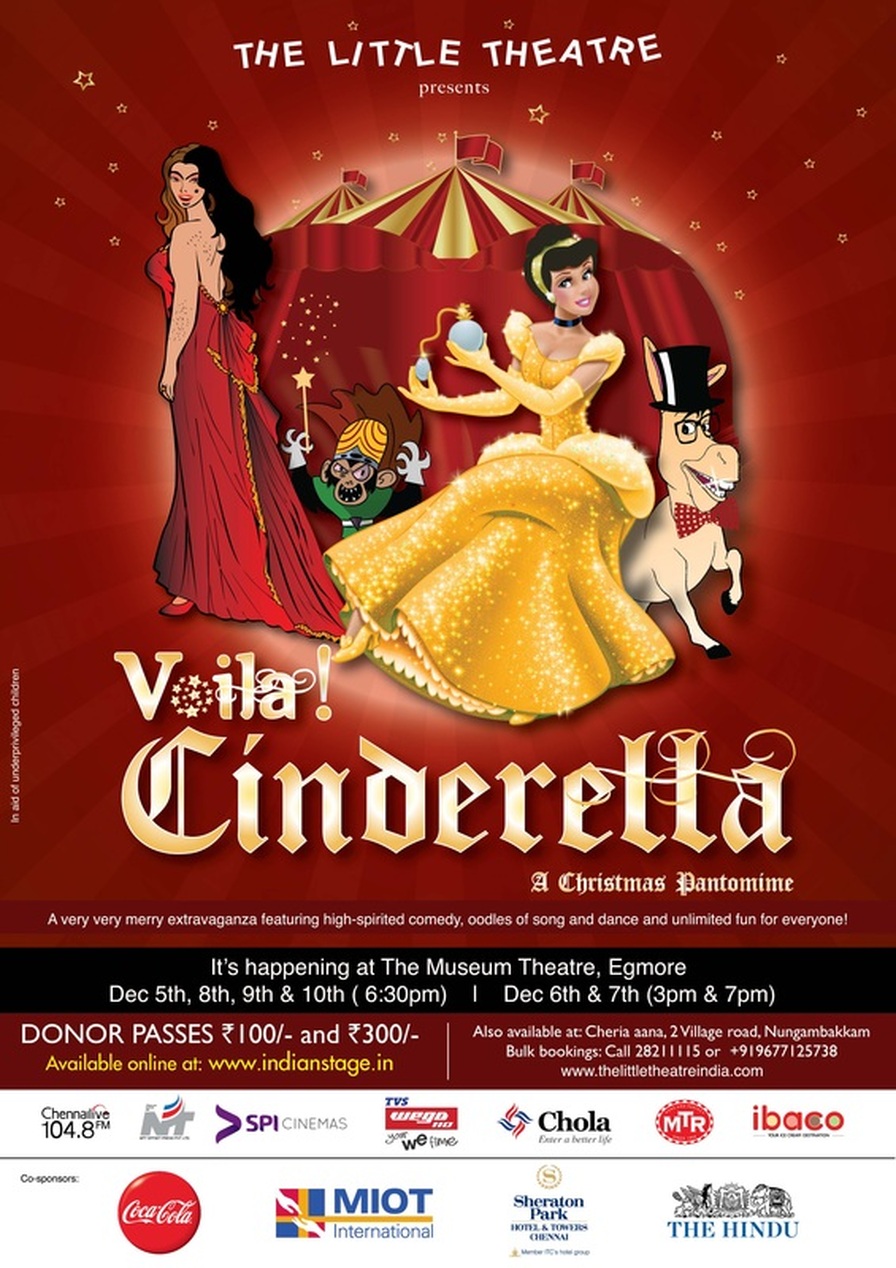 In a land far far away lived a kind and beautiful girl named Cindy. She lived with her stepmother and two evil stepsisters: Stout and Doubt! And in the Royal Palace lived the King, Queen and Prince Charming who had a best friend Prince Farming.

It is that time of the year for Prince Charming’s annual singles mixer and as usual everyone in the kingdom is going. All except Cindy. What did her sisters do to her this time?

Meanwhile, in the secret hideout of Mojo Jo Jo & Professor some serious monkey business is under way that could threaten the very existence of the King, Queen and Prince Charming and disrupt peace in the kingdom forever!

Get ready to be charmed and farmed by the enchanting tale of Cinderella like you have never seen or heard before…. narrated by a traveling Dhobi and his Donkey- Meenakshi or was it Thenmoli or Tripurasundari? Never mind! She’s a donkey…..

Let’s bring in this Christmas season with lights, songs, dance and action with our 20th  Christmas Pantomime “Voila! Cinderella!” at the Museum Theatre!!


From the makers of "Lord of the Bling!" "The Free Musketeers!" "Alice in iland!" "Beauty and the Beast" "Robinhood! Wanted for good!"
" Romeo & Julieto in Mexico!"  "Pirates of the Curried Beans" "Elves & the shoemaker!" "Cleopatra"   "Alibaba and the forty thieves!"
"The Frog Prince and the Royal Catwalk"  " Puss in Boots!"  "'Snow white and the traveling circus!"  "The LIttle Mermaid"
....... & just 5 months ago the Sci Fi musical "Atita! The curse of the Xeno!"